African American men, incarceration rates are continuously questioned and our current criminal justice system for years now, has been labeled the New Jim Crow.  Most African American men who have a history of incarceration, suffers from some type of mental health disorders.  Our prisons and jails continues to be overcrowded and understaffed, which leads to more stress and violence from the inmates and the staff.  African American men who are incarcerated are exposed to traumatic and violent experiences not only while they’re incarcerated, but even once they’ve been released, and are discriminated against, thereafter. 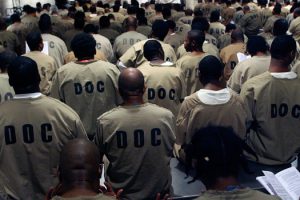 Take into consideration that, in our society today, an African American man with no criminal history, is often, not affected by mental health as much as the one who has been incarcerated.  It is a known fact that the latter man, has more symptoms of depression and psychological mental health issues.  Depression can be caused by continuous discrimination for example.  Our black men who have been incarcerated for a long time, are expected to return to society and live as an upstanding citizen, but have not been given the resources they need to simply survive.  Therefore, they become depressed and most times, return to life a crime because it’s familiar to them.

This is no surprise because good mental health affords a person to cope with the stresses of life and maintain healthy and happy relationships with people.  Incarcerated men, are often separated from their loved ones, who live in poverty or close to it and can’t afford to visit them because our prisons are usually located in rural areas that are not easily accessible to get to, and they are usually located hours away from metropolitan cities.  Not having physical contact with people, especially your loved ones, can be detrimental to anyone’s mental health.

It is disheartening when our African American incarcerated men, can only be treated for their mental health disorders, while incarcerated, because they have free access to the medicines that they need and/or counseling services for support.  But again, once they are released from jail or prison, they lose those valuable medical resources and therapeutic services because now they lack affordable healthcare.  As with any issues or health concerns that requires medical treatment, it is imperative that there are no lapses in care or treatment.

Recidivism rates continue to rise because law enforcement agencies (usually at the city/town level because they come in contact with the alleged criminals first) are not properly trained on mental health issues and therefore, will arrest black men, who are innocent of the alleged crime(s) or they will be arrested for a minor offense.  Hospital beds are full in mental health facilities, so jails and prisons have become the place to house black men who are mentally ill.  Once in custody, these black men who suffers from mental health issues, will eventually become lost in the criminal justice system because they can’t afford the best legal representation.

With barriers created by policymakers to keep any black man from living a life of equality and prosperity like his white counterpart, incarcerated African American men who suffers from mental health illnesses, triggers from deep rooted racial adversity.  Although racism in America has come a long way, it still exists in the healthcare and prison industries that affects our black men overall.  As a community, we must continue to advocate for prison reform and help take care of our brothers, on the inside, they mentally need us.

One may also connect with this sister online over at; FTSimpson.com.

INCARCERATION RATES VARY WIDELY BASED ON WHERE YOUNG MEN GREW UP